Warning: Declaration of WDS_XML_News_Sitemap::generate_sitemap($sitemapurl, $sitemappath, $echo = false) should be compatible with WDS_XML_Sitemap_Base::generate_sitemap() in /htdocs/wordpress/wp-content/plugins/wordpress-seo-plugin/wds-files/wds-sitemaps/wds-sitemaps.php on line 544
 A Season (or 13) for Shopping: Stores Create More Holidays; Tissues Made for Summer, Pink Irons for Fall | Retail & Innovation
Aller au contenu principal

Spring, summer, fall, winter… storage and organization? Most shoppers see the seasons change four times a year. Retailers see anywhere from 13 to 20 and all those seasons are designed to get shoppers into their stores. 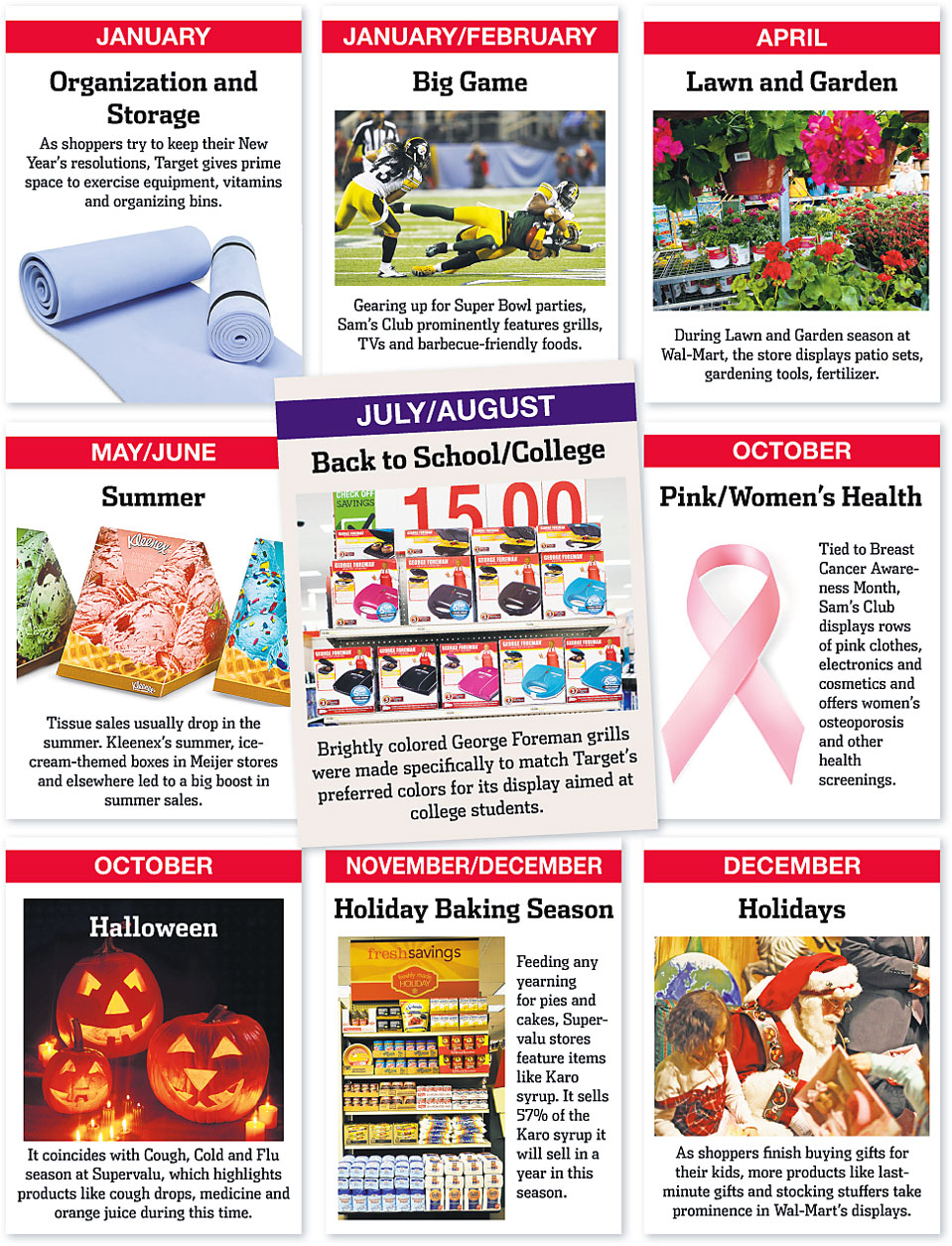 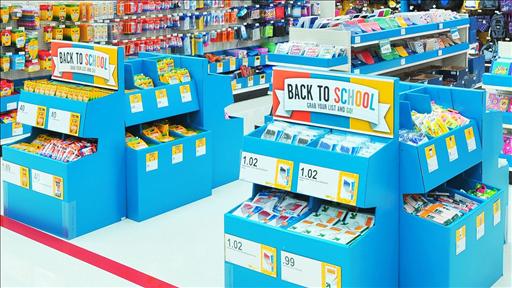 You might think there are four seasons a year. But your local grocery or big-box store knows there are really 13 — and 13 opportunities to get you to buy. Sarah Nassauer explains.

« Storage and Organization » comes the first weeks in January at Target Corp. It’s a chance to display products that might appeal to shoppers’ New Year’s resolutions like exercise equipment. Sam’s Club, part of Wal-Mart Stores Inc., celebrates « Fall Gatherings » in October with displays of rakes, sweaters and comfort food. Late fall at Supervalu brings the less-than-celebratory « Cough, Cold and Flu » season, not to be confused with late spring’s « Allergy Season. » In stores now: « Back to School/Back to College. »

A key goal is to get people to buy impulsively, something they do less of these days. The number of impulse purchases fell to 15% of purchases in 2010, from 29% in 2008, according to market-research firm NPD Group.

The average shopper visits a big-box store once every two to three weeks, NPD says. Shoppers go to the grocery store, by contrast, every seven to 10 days. By adding grocery items prominently, stores are trying to get people to make more frequent shopping trips.

To get shoppers to make frequent trips to their stores, retailers create additional seasons beyond the calendar usuals. 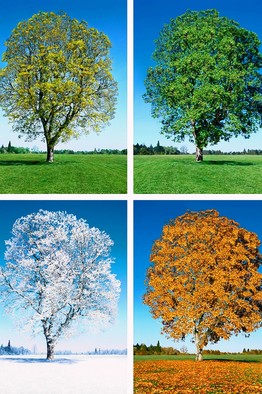 Getty ImagesThe goal of the additional seasons is to get people to buy impulsively.

•Superbowl or New Year’s Resolutions or other themes (January)

• Back to School/College(July through August)

• Holiday Entertaining and Gifting(November, begins the day after Date, see above.)

• Back to School/College (July/August) 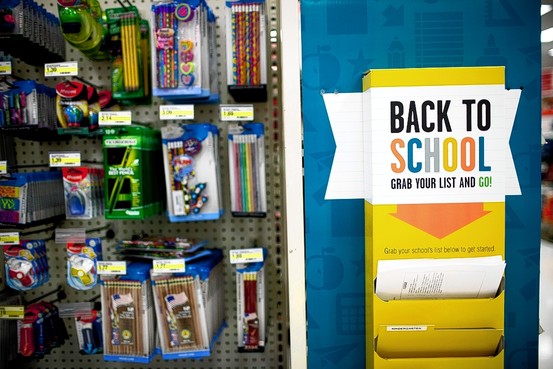 The true art of the seasonal display is to trick out products that don’t seem like obvious impulse buys—like vacuum cleaners or tissue boxes—in a way that makes shoppers grab first and think later. People are usually willing to spend more during special seasons, retailers and manufacturers say, especially if they are spending on their children.

Products that may seem neither impulsive nor seasonal are finding ways to be both in order to be part of the prominent displays in stores.

This summer Kleenex introduced boxes that look like ice cream cones. Shoppers could find the ice cream Kleenex in the actual ice cream aisle of Meijer Inc. stores, says a spokesman for Meijer, a Midwestern retail chain selling groceries and other goods.

The Kimberly-Clark Corp. brand was following its cake slice-shaped boxes made for winter holidays and playing off success of triangle-shaped watermelon, lemon and orange Kleenex boxes last year. Those boxes found their way into summer displays and elsewhere beyond the paper products aisle in stores, says Christine Mau, director of design for the company. Kleenex sales typically drop in the summer when people have fewer colds.

The company asked its design team, « what can you do design-wise to get us to the front of the store in the summer? » says Ms. Mau. After researching « what summer means to people, » the company realized watermelon resonated with people who think of summer as picnics, family gatherings, and fruity drinks, Ms. Mau says.

Putting together a seasonal display is a high-stakes effort. If a customer can’t find something, « she is probably going to walk, » says Stacia Andersen, Target senior vice president of merchandising, following the consumer goods industry’s habit of referring to all consumers as ‘she’ because women make the majority of purchases.

And making sure that one big-box store doesn’t look like the next big box is key. Target plans seasonal displays with product manufactures about a year in advance.

A product’s color can make a difference. Target told TTI Floor Care North America, Inc. that if it wanted to get its typically red Dirt Devil vacuum cleaners into the retailer’s prime « Back to College » seasonal displays, it need to make hot pink, teal and black versions. Meanwhile, Jarden Corp., which makes small household appliances among other items, created hot pink and teal Sunbeam irons and toasters for the displays.

Internal research at Target showed that college kids want to personalize their dorm rooms with bright colors. Fitting into the marketing scheme is worth it, says Stephanie Begley, associate marketing manager for Dirt Devil. Target’s college displays « hit our market » of first-time home owners and young adults on their own for the first time, she says.

To slice the calendar into as many seasons as possible, retailers create sub-seasons. At Sam’s Club, the calendar reaches about 20 seasons with some overlapping.

At Wal-Mart, the Christmas shopping season starts the day after Thanksgiving with children’s gifts and holiday home décor getting prime space. By December, stocking stuffers will get more prominent placement, along with holiday entertaining food and last-minute gift ideas, says Tara Raddohl, a company spokeswoman.

« We aim to be where our customer mindset is, » so they don’t head to the competition, she says.

In a suburb of Minneapolis, Supervalu runs a « lab store, » a model store not open to the public where the third-largest traditional grocery store company in the U.S. can test how new products look on its shelves and experiment with seasonal displays. Last month, Supervalu employees worked to create the perfect fall endcap, the shelves that anchor the end of the typical grocery store aisle. The goal—easy meals for parents pressed for time at the start of the school year. 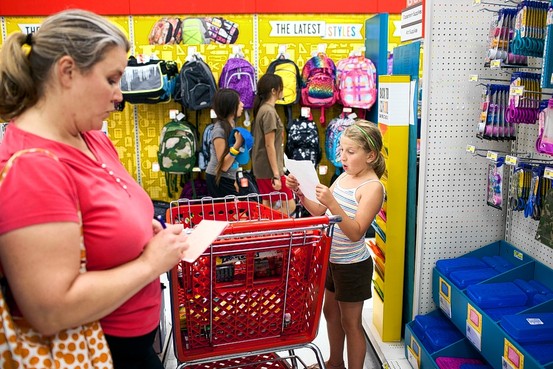 Problems quickly became apparent. After setting up tuna in pouches, mayonnaise, peanut butter and bread on the lunch endcap, employees saw that the tuna pouches tilted slightly backwards. The tuna « didn’t present itself well to customers, » says Chris Doeing, a director of merchandising for Supervalu, which owns chains including Albertsons and Cub Foods. Tuna was booted from the endcap to a nearby shelf.

On endcaps, best-selling items often go on the larger shelves near the floor to grab people’s attention from farther away. Employees experiment with which size and shape products look best together.

Dirt Devil vacuums were made in pink to get in Target’s prominent ‘Back to College’ display. 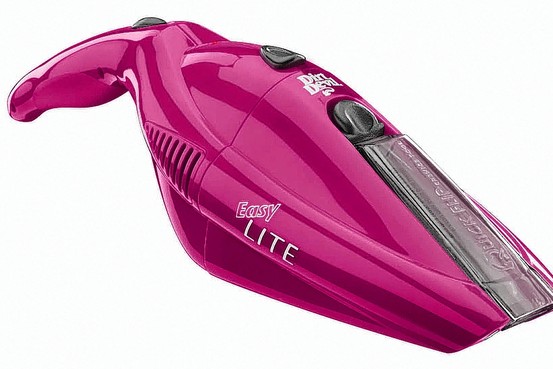 When a product sits on an endcap its sales can increase three-fold, says Tom Lofland, Supervalu director of sales and promotions.

Currently, back-to-school is at the forefront of the display battle. This year Wal-Mart is putting more seasonal products in one place to make shopping easier. In the past, for example, customers may have found that the « Back to School » section didn’t feature enough of the store’s selection of backpacks, says Ms. Raddohl, a spokeswoman for Wal-Mart. For the first time, this year Procter & Gamble Co. is grouping many of its personal-care products like deodorant, shampoo and razors into « Back to College »-themed bins in Wal-Mart.

At Target, local store managers are responsible for tracking down the supply lists that local schools give parents of items their children must bring. Managers send them to headquarters. Regional variations—one school might require kids to have composition notebooks, another spiral—affect what goes on shelves.

« We have become more focused on ‘the list,' » Ms. Andersen says.